With twenty complicated virtual host configurations, the "httpd.conf" file on one of my servers was becoming unwieldy. Time for a little pruning... 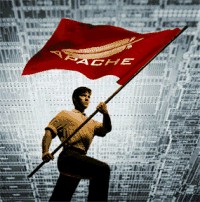 The "httpd.conf" file had grown to a massive 243Mb. Making changes to the configuration was proving to be an exercise in frustration. First I would download the file for editing, then I'd have to search through the 4000 lines of directives - jumping back and forth as necessary in order to effect copy-and-paste operations and so on. Finally, I would have to wait for the amended file to upload back to the server before I could restart. Doesn't sound too bad so far but, when I was experimenting with the configuration, or trying to get a rewrite rule to work correctly, I would have to go through the search-edit-upload procedure repeatedly and it became irritating after a while.

Apache has an "Include" directive (in versions 1.3 and greater) which directs the server to include the directives in a seperate file at start-up. So I could do something like this in "httpd.conf":

This would allow me to "spin-off" configuration files for each virtual host. Having twenty virtually-identical directives in my "httpd.conf" didn't really appeal to me, but it was the solution I was looking for, so I ran with it and it proved to be an effective way of managing the hosts. The best, however, was still to come.

I was reading up on the "Include" directive, for an unrelated configuration change, when I came across the following note:

New in Apache 1.3.13 is the feature that if Include points to a directory, rather than a file, Apache will read all files in that directory, and any subdirectory, and parse those as configuration files.

This constituted a eureka moment for me. I could replace twenty "Include" directives with just one!

This is a simple, concise instruction and I love it. I no longer have to maintain a list of directives and I no longer have to edit two files when adding a new virtual host. I just upload a small configuration file into the appropriate directory on the web-server, restart the server and my new host comes online. Perfect.